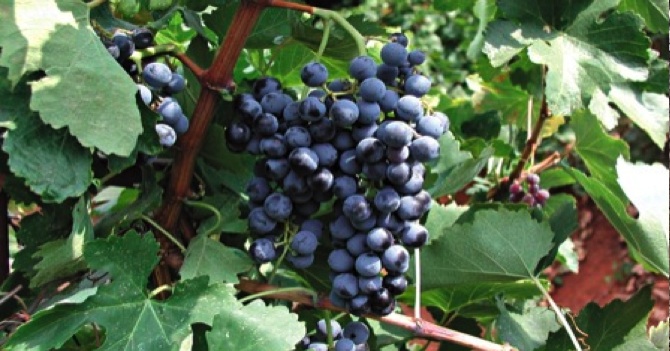 The Grape Limnio (LIM-nee-oh) is a Greek red grape variety originally indigenous to the island of Lemnos. It is regarded by many wine experts to be one of Greece’s most important red grapes in addition to what is believed to be the oldest known grape variety. It was written about by Aristotle and Herod. Lemnos is a far northeastern Greek Island fairly close to the northern Turkish coast and the entrance to the Bosporus (passage to Istanbul). Limnio no longer has DOC status on Lemnos, where now the only DOC grape is Muscat of Alexander.
Viticulture Limnio vines are known for their hardiness and ability to survive harsh droughts. The grapes have the ability to produce high brix or must weights that can translate into noticeable alcohol levels, and also can have significant phenols at harvest that can translate into enhanced herbaceous overtones. It is therefore critical to “early harvest” this generally late ripening grape or to balance it by blending. It is often blended with up to 20% to 30% of selected Cabernet Sauvignon, Cabernet Franc, Merlot, Grenache, Petite Syrah, Aghiorgitiko or Xynomavro.
Wine style, food pairing, tasting notes Limnio produces full bodied wines with moderate tannins and acidity with distinctive mineral aromas. It is often itself used as a blender due to its ability to add color, weight, acidity and an herbal aroma some think is reminiscent of bay leaves. Wines made from Limnio are often paired with aged cheeses, game meats and roasted dishes. Deep red color with spicy aromas of pepper and cinnamon. Full and easy mouth, with delicate tannins. 12.5% alcohol. 100% Limnio. Low pressure pneumatic pressing. Six to eight days maceration were followed by malolactic fermentation then aging for twelve months in French oak barrels.
The Winery – Domaine Porto Carras The vineyards of Domaine Porto Carras are located on the western coast of the Sithonia peninsula on the northestern Greek mainland, the part that extends from south of Macedonia across southern Bulgaria to northwestern Turkey and directly north of the island of Lemnos. The largest nearby city would be Thessalonika. Porto Carras is 475 hectares (1,200 acres) of spectacularly terraced vineyards making up one of the largest and most picturesque vineyards in Greece and possibly in Europe. The vineyards were first planted in 1967 and in 1981 the Estate was recognized as an “Appellation d’ Origine Controlle” zone under the Greek name “Playes Melitona” which translates “Slopes of Meliton” or in French “Côtes De Meliton”. The land upon which the vineyards were planted was formerly owned by the Monastery of Grigoriou on the slopes of Mt. Meliton. Professor Peynaud from the University of Bordeaux, father of modern vinification in the Bordeaux region, began testing the adaptability of various grape varieties to the climatic and soil conditions of the Estate. 27 varieties were planted in various locations, 13 of these were French (including the first Cabernet planted in Greece) and 14 were Greek. All the vineyards are planted in terraces, allowing for perfect drainage. The soil is of finely broken schist, enabling the roots to reach great depths with ease in their search for moisture. Yields are deliberately kept exceptionally low. Harvesting is carried out by hand, and usually begins in mid August and lasts for four weeks. It is generally agreed that estate is qualitatively one of the most outstanding vineyards in Greece.