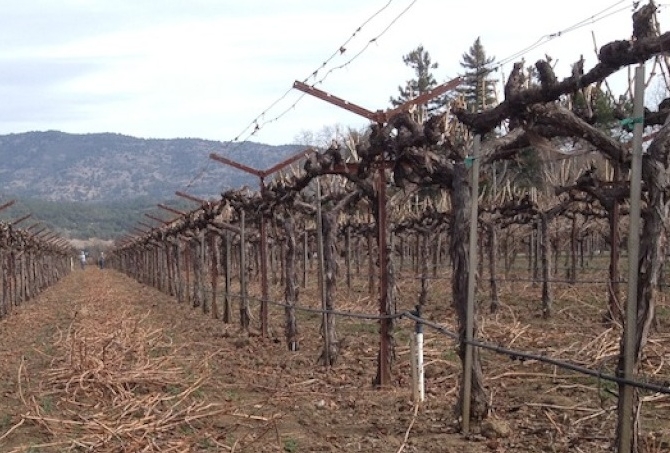 California is experiencing one of its worst droughts ever. 2013 was the shortest in rainfall since recording data began. 2014 looks possibly worse. So the obvious question is how will this affect grape growing and winemaking? Understand that 85% of California’s water is used for agriculture. It really doesn’t help much to stop watering the lawn or taking shorter showers.
Grape vines survive just fine without much water. Mature grape vines have extraordinarily deep tap roots, sometimes going down forty or more feet. They seek out what water there is and capture it for their use. Many areas of the world “dry farm” grapes relying on no irrigation and only natural rainfall. Dry farmed grape vines or vines in the middle of a drought will produce fewer grapes per acre or per vine. Water “plumps” up grapes and allows the vines to have more “vigor”, but these attributes do not necessarily produce a higher quality crop – higher yield, yes, but less concentrated juice. So in the middle of a drought the yields in any given year and going to go down (think higher prices due to decreased supply against the same or growing demand, higher prices due to cost per acre to farm being spread across a decreased yield, and more intense juice – higher prices due to increased quality).
A related climate threat that the drought “indicates” but does not necessary “predict” or confirm as to do with the unusually warm winter we have had. Have you Californians noticed that flowers (roses in particular) in your garden may already be blooming? There has been no cold to keep the plants dormant. The same thing in happening to grape vines, which are already beginning to have a very early bud break (incidentally a related phenomenon is happening in the Lake Tahoe and other Sierra Nevada areas where the bears have not gone into hibernation). If the buds break early and then we get winter frosts or freezes, the frosts destroy the buds and therefore the crop leading to a grape shortage.
Wineries on the other hand pretty much cannot operate without a good supply of water. Water is used to clean fermenting tanks, to wash barrels, to wash down floors, for sorts of cleanliness and sanitary issues. It is generally accepted wisdom that the saying “Save water, drink wine” is false. Making wine requires a great deal more water than the wine that is produced – maybe a factor of 10 gallons of water to 1 gallon of wine. So extended droughts can cause many issues in the production end. Using gray water where possible can alleviate this but that requires that our water systems be reconfigured with three rather than two pipes (one hot, one cold, one gray water). Gray water today is of drinking quality even though most of the public shies away from that use. The real issue that drought will increase costs and could require installation of more infrastructure by our society. There is plenty of water to drink if we desalinate and as climate change causes the oceans to rise we can desalinate more and more. But it is expensive and does have its own fossil fuel cost. Incidentally the real cost to the wine industry of climate change and higher sea levels is to wipe out (flood) low-lying vineyards. Think of Napa and or Sonoma without the Carneros region – flooded out. Florida or landfill portions around San Francisco Bay – huge swaths of land missing.