In the early 1970s legendary California winemaker Andre Tchelistcheff telephoned amateur winemaker Al Baxter and invited himself to dinner and a tasting. Tchelistcheff who was at that time the most influential post prohibition American winemaker was the mentor for such notables as Robert Mondavi and Louis Martini. He was most notable for his contributions toward 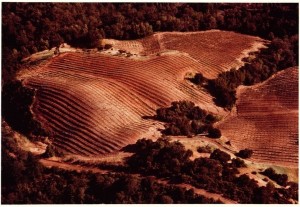 defining the style of California’s best wines, especially the Beaulieu Private ReserveGeorges de Latour Cabernet Sauvignon. Andre had heard about Baxter’samateur winemaking and about some wonderful wines made by Al in his basement. After the dinner and tasting Tchelistcheff concluded thewines were very good. He advised Baxter to consider going commercial. Veedercrest was born!

Baxter formed an investment group with co-principals Ron Fenolio, now sole proprietor of Veedercrest, and the Ring Family of New Jersey. A 300 acre property was acquired on Mt. Veeder for vineyard developmentand a vineyard was planted. In the 1970s vineyards, especially mountain vineyards, were planted with much winder spacing than today. Part of the reason was to allow the wide 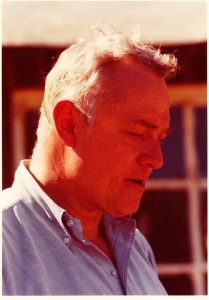 track tractors to work between the rows without turning over. Today tractors can be adjusted so that the tractor is level and the wheels and tracks ride on different levels of the vineyard. Veedercrest pioneered planting some of the steepest slopes on the higher elevations of Mt. Veeder.

Among Baxter’s innovations as one of the early California pioneering winemakers was his participation in the development of fruit forward wines, the making of California’s first true Bordeaux blend, using all five Bordeaux varieties (including grapes from the only acre of Malbec then in California), and promoting truth in labeling with full varietal descriptions and full vineyard designations on the front label of the bottles.

The year 1972 saw the first releases, including Chardonnay, Cabernet, Merlot and Reisling. By 1976 the wines had garnered such critical acclaim that they were selected by Steve Spurrier to be in the infamous 1976 Judgment of Paris tasting where Chateau Montelena and Stags Leap bested the best of the French. Make sure you see the entertaining movie “Bottle Shock” about this great event, featuring Chateau Montele 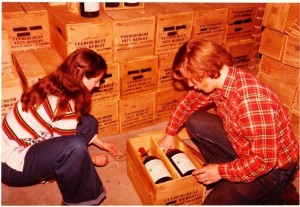 na’s story. At that historic tasting Veedercrest Chardonnay was acclaimed as the most “French” in style of all the Chardonnay wines entered, regardless of whether French or California in origin. Veedercrest wines were later served at White House dinners under President Jimmy Carter and to Pope John Paul II during his visit to Philadelphia. In 1981, at the International Wine Exposition in Bristol, England, Veedercrest garnered more awards for its wines than any other American winery. The tradition of making great award winning wines continues today.