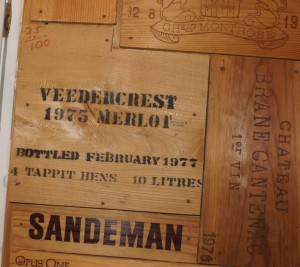 Veedercrest’s winemaking roots can be traced back 130 years to a family farm in the Friuli region of Italy, where the great grandparents of Ron Fenolio, Veedercrest’s proprietor, owned vineyards planted to Pinot Grigio and Merlot.    Ron’s early years were spent no his Nonno and Nonna’s farm in the eastern San Francisco Bay Area of California.   There the family grew cherries, apricots, walnuts, almonds and grapes, and like many Italian families, made wine in the basement.  Ron grew up on this farm helping with farm chores and experiencing the tastes and flavors of fresh farm produce.  His Nonna, who had learned how to cook working in her aunt’s restaurant in Italy, was a wonderful cook.  He also was allowed to experience the various wines made by his grandfather several great uncles in respective basement wine cellars.

In the Napa Valley the family’s Napa’s heritage dates to the 1920’s when a paternal cousin’s great uncle in law was an owner of Charles Krug.  This was prior to the acquisition of that venerable winery by the Mondavi family.  Today, he and three of his cousins are winemakers as is a distant cousin by marriage.   These five family members individually own six wineries.   It is understandable that given this rich heritage that Veedercrest should produce distinguished wines in the European and California tradition.